What Is Francais Authentique All About?

I want to offer you an opportunity to take a look at my Francais Authentique video review below. I explain how FA has helped me to learn French fast and easily. After watching the video, I recommend coming back to my article because it’s even more comprehensive and explains more details of this program.

The founder of Francais Authentique is a French man Johan Tekfak. He is an online entrepreneur and a father of two children. Before he worked as a project manager in a big company Nemak in the automotive industry. He launched Francais Authentique in 2011. He continued working on his job in Nemak and at the same time, he taught French online with his podcast, website, and Youtube-channel.

Little by little Francais Authentique started to grow and get more followers. People enjoyed learning French with this natural method of Johan and he kept on creating more content every week. He started also earning a good income with his products and eventually he was able to quit his day job in Nemak. Even though he earned good money as a project manager, he wanted to concentrate full time on Francais Authentique to make it even greater so more people could learn French.

Nowadays Johan publishes new videos and podcasts many times a week. Also, the quality of the videos and podcasts has improved a lot if you compare a few years ago. Johan has gained a lot of expertise also with technical stuff and how to provide high-quality content for his followers. He is a very creative person and he really seems to give his whole heart to Francais Authentique to make it the best as possible.

When you start to listen to some of his podcasts or watch his videos, you will realize why FA is so famous nowadays. The way he explains all things and tips that he gives are great. You will not only learn French but also some important tips for life too.

=> Start Learning French for Free with Francais Authentique! (One of the best language learning methods in the world.)

How Do You Learn French with Francais Authentique?

Francais Authentique is also based on natural learning methods like Pimsleur. You learn by listening to a native speaker. That is the same way you learned your mother tongue when you were a child. You learned other people speaking, little by little you started catching words and then you used them yourself. First, you didn’t probably pronounce perfectly but parents understood you. If not, they asked you questions.

In Francais Authentique you will listen to Johan speaking about French interesting topics. The idea is that he speaks ONLY French so you really will learn it. No English. He uses the same principle with his website and Francais Authentique -blog. He writes only in French because it forces you to learn new vocabulary.

Johan talks about many different kinds of topics

There are so many episodes already that you can for sure find subjects that are interesting to you. And every week he publishes new content. I have listened almost all of them and some episodes even 3-5 times :D. Repetition is one key to learning a foreign language. In his free 7-day course that if you want to learn a word, you need to hear it about 40 times before you really learn it. So don’t blame yourself next time when you forget a word. That’s natural but with consistent repetition, they will stick into your brain.

A Screenshot of FA-Youtube Channel

You Don’t Need Time to Learn with Francais Authentique!

I have heard many people saying, “I don’t have time to study languages.” With Francais Authentique you will not have that problem anymore. Last summer I studied French almost every day for over an hour even though I didn’t have any time. How is that possible? I put on the headphones, started listening to Francais Authentique and went to work by bike. On my way to work and back home I listened to this wonderful podcast.

I would have used that time anyway for going to work and coming back. But now I learned something new at the same time. Already in a month, I noticed a huge improvement in my French skills. After one month I understood much more than in the beginning. And I hadn’t used even a minute for studying it! 😉

All you need is headphones and some device to run podcasts/videos, for example, your phone. This time you can’t use the excuse that you don’t have the time or you don’t have energy. Learning with FA is relaxing and it’s like listening to a good friend who encourages and shares motivational thoughts about life. In addition, you will learn a language almost automatically.

What Are the Cons of Francais Authentique?

It’s hard to say anything bad about this system. It has so many benefits for your French skills and it’s easy to use. You don’t need a special language talent or other characteristics. The only things you need is an internet connection to connect to this awesome language learning resource.

Somebody could ask, “How can I learn to speak French by watching their videos and listening to podcasts?” That’s a good question and I will have a good answer. As we have talked in other articles you will need to talk if you want to learn to speak a language fluently. But in order to speak fluently, you need to learn some vocabulary. You can’t speak French if you don’t know the words.

Who Is Francais Authentique for?

The system is created for people who already have some skills in French. You have studied it, for example, a little bit at school, on the Internet or with your friends. Francais Authentique is not for those who haven’t learned French ever before. If you can’t say “Hello, how are you?” in French, then this is not for you.

Johan uses very simple and understandable language so it’s optimal for French learners. He doesn’t speak too fast so you can easily catch what he is saying. I used Francais Authentique first time when I had studied only for one month in Duolingo and I found it already useful back then. However, it was even more useful when I had learned more skills because I understood more what Johan was talking about. Even though you wouldn’t understand every word that he uses you can understand the words because of the context.

What Is the Price of Francais Authentique Or Is It Totally Free?

Francais Authentique has tons of free content. They have 167 (3.12.2016) of Youtube videos, hundreds of podcasts, hundreds of posts on different social media platforms and an active community of +280 000 users on Facebook.

If you want to speed up your French learning then you can buy their premium courses. Francais Authentique has created 3 courses to teach you French in a natural way. Their courses are called “Pack 1 Découverte”, “Pack 2 Discussions Authentiques” and “Pack 3 Vidéos Authentiques”. Johan has created the first course himself, Pack 2 with his wife Celine and Pack 3 with his brother Jimmy.

In a picture below you can see more information about each of those courses: 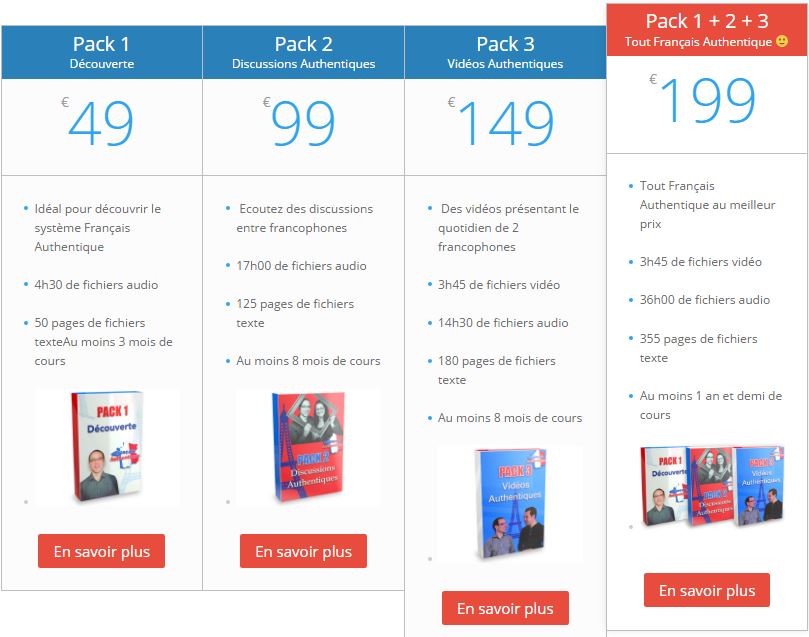 If you want to get all three courses together, it costs 199€. You can compare it to the language courses that you can buy in your local town. There you get some local teacher who is most of the time using some old methods. With Francais Authentique courses you get tons of useful material from one of the most famous French teachers in the world with natural learning techniques.

They have also a community called “Academie Francais Authentique”. It is a premium section where you can get a straight access to the founder of Francais Authentique Johan Tekfak through Facebook and WhatsApp. There is also lots of content (videos, audios, and texts) that is available only for members of the academy. The price is 29€/month or 289€/year.

My Final Opinion of Francais Authentique

In my opinion, Francais Authentique is probably the best way to learn French that I have seen so far. The Pimsleur method may be a bit faster but FA is totally free. Of course, you can buy paid courses too to support the creator and give an additional boost to your French skills. Many times when you invest money in something it can give you additional motivation because you want to take all benefit of money that you invested.

If you want to learn French with a natural way by listening to a native speaker I can definitely recommend to use it. They have a free 7-day free audio course which will explain more in detail how and why this method works.

Visit their page and let me know what do you think? If you are really interested in learning French, I am sure that you will like it!

Have you tried other audio-based learning methods? Or have you used Francais Authentique already before?

Leave a comment below and I will be more than happy to follow up with a personal response!