So you want to learn a language but you don’t have anyone to practice with? Or finding a language partner seems challenging? Then HelloTalk is right for you!

When I used HelloTalk for the first time I was really surprised how fast it is to find language partners. You just need to write your information (= what is your name? When are you born? and so on.). Then set what language would you like to learn and what is the language that you already speak. Then you’ll immediately see the people that are trying to learn the language that you already speak and they are the native speakers that you would like to learn. 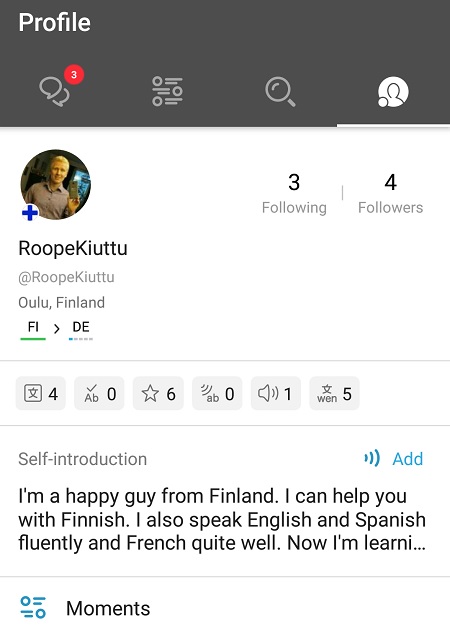 Setting up a profile takes only 2 minutes

Let’s say for example that you are an English speaker and you want to speak Spanish. Then you will immediately find tens or hundreds (or even thousands, I don’t know the exact amounts) of Spanish native speakers who are learning English. They will help you to learn Spanish and you can help them to learn English. It’s a win-win situation. And in the top of that, you will get a new friend.

I set up on HelloTalk that I am Finnish and want to study German. Then I saw “Matches” which means that these people are German native speakers and they want to learn Finnish. I was surprised how many Finnish learners I always find even though it’s just a small language. Imagine how many Spanish => English or English => Spanish learners you could find. 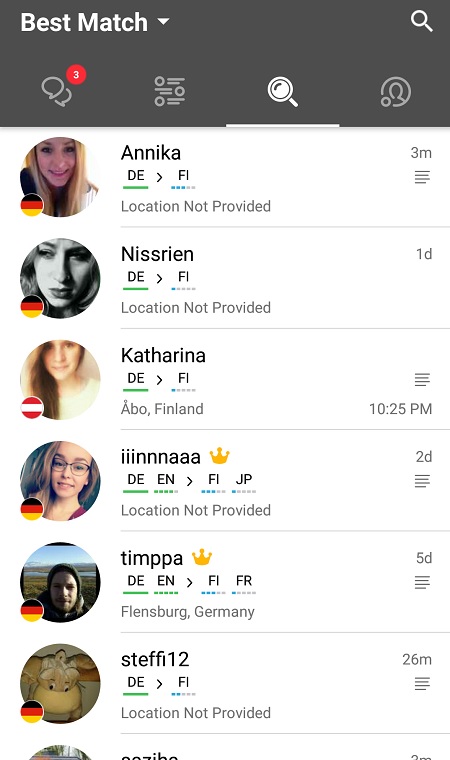 HelloTalk shows immediately other members that want to practice with you

Other Features in HelloTalk

HelloTalk doesn’t only connect you with other language learners but it also gives you tools that can help you to study a language together via your smartphone. There are so many useful tools on HelloTalk that I haven’t even tried them all yet. I gathered here pictures of some tools that you can use. 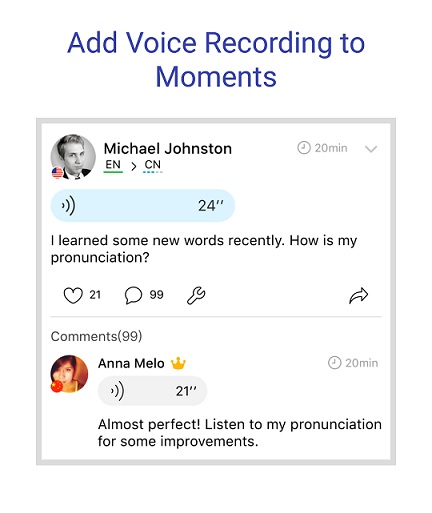 You can send voice recordings in HelloTalk

The fastest way to learn a new language is probably by speaking it a lot. HelloTalk doesn’t only concentrate on typing because you can also send voice messages and practice your pronunciation. Then your language partner can give a right pronunciation for you. One good thing is that you can listen to the right pronunciation over and over again if you want. In addition, things that you learn are most likely relevant to your everyday life (compare boring classroom studying). 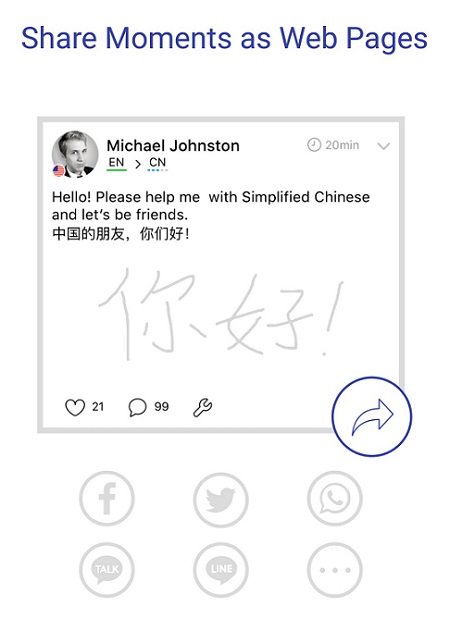 You can share moments in HelloTalk. Write also in Chinese and with other letters.

HelloTalk enables you to share moments on other social medias. It also gives you a possibility to write in Chinese letters. I know from my own experience that Chinese letters require practice even though it is an easy language to learn. 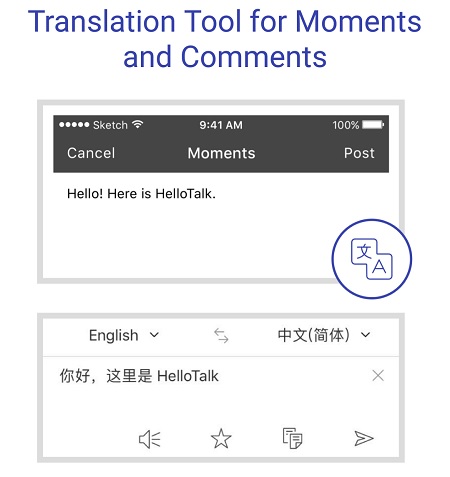 You can check the translation for messages in HelloTalk

A translation tool is a wonderful tool that is not available in normal social media apps like WhatsApp. You can set up to which language you want to translate your partner’s messages and HelloTalk gives you a correct translation. This tool can save your time because you don’t need to jump from one app to another in order to understand what the other one wants to say.

You can also make group chats in HelloTalk. Then you can gather many members to chat with a same group and practice together. Voice calls are also possible which makes language learning more effective.

Who Is the HelloTalk for?

HelloTalk is for anyone who wants to practice a foreign language with someone else. You can also find new friends and meet interesting people through this app. You will also have an opportunity to share your own native language to a foreigner which can be fun.

It’s completely free to join in HelloTalk and chat with your language partners. I have always used only their free version.

They have also a VIP-version available if you want to invest some pocket money to this app and to your language learning. I bought once one language app for learning German just because I thought like this, “If I buy this app, I have invested money on my German studies. It motivates me to use this app in order to take a full benefit of my invested money.” Maybe buying a HelloTalk VIP-version can also motivate you to study more your target language.

HelloTalk VIP costs 3,29€/month, 21,90€/year or 84,99€ one-time payment. To my ears, one-time payment option sounds pretty expensive to other ones. Marketers want to add a few options to make other ones seem more attractive. 😉

My experience with HelloTalk was very positive. It helped me to find some German speakers much quicker than I had thought. However, I haven’t used it very much lately because I don’t like to chat on my phone anymore. I prefer talking to people on phone or in a real life because it’s more effective. Typing on your phone can make tension in your neck and back so it’s not very healthy either.

My #1 recommendation for finding a language partner is still Italki because I like their platform a lot. I guess that Italki is also much bigger than HelloTalk. I don’t have a statistic about this. Let me know in the comments if you have.

Have you used HelloTalk, Italki or other similar services?

I would love to hear if you have used this kind of language apps to practice languages. Seeing a new comment from my visitors makes my day. Please, use 10 seconds and leave a comment below and I will be sure to answer you personally within 24 hours (usually in 2-3 hours).

24 thoughts on “What Is HelloTalk? – An App to Find Language Partners in 2 Minutes!”