“What is the fastest way to learn a foreign language?” This is probably one of the most important questions when we are talking about language learning. I believe that by reading this article and taking actions you can save hundreds of hours during your life. So I bet that using 5 minutes for this article is really worth it. 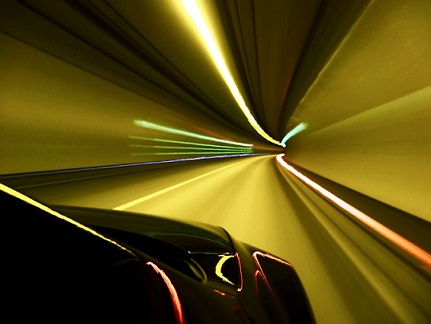 Want to go to the fast lane of language learning? Read this article and take action.

“There is no the fastest way!” Or is there?

I know by experience that there is no automatic way to learn a language. Some people say that you can automatically learn a language by putting on your headphones and listen while you are sleeping. I tried it for a few times. Didn’t work.

Then some “experts” claim that other people learn by listening, while others learn when they can see the words. But the practice shows that everybody learns much faster by doing. Statistics show that you remember of 5-10% what you have heard by 90% of what you have taught for others (in the other words, done yourself). This doesn’t even depend on what kind person you are. If you are a homo sapiens with one head and two legs, the fastest way to learn is by really taking action.

What does this mean with language learning?

Start to speak from day 1. If you want to learn to speak, you need to open your mouth. When you are speaking a language with someone else, there are many benefits:

Speaking a language with persistence makes miracles. But what if you don’t have somebody to practice with? Find somebody in Italki!

What if you are not able to speak with someone and you would like to practice speaking? You can also speak alone. Tell a story about your day to yourself. One man said that he enjoys talking with himself for two reasons. 1.He loves to listen to intelligent people. 2.He loves to have a conversation with someone very intelligent. 😉

Okay, what if you are in a situation when you can’t speak with someone nor alone? For example, sitting on a bus and going to work. You don’t want to speak with people or they don’t speak the language that you would like to practice. Then you can listen to podcasts or audio programs. Pimsleur method is probably one of the most famous audio courses and Francais Authentique is becoming the most popular French podcast for learning French.

The Fastest Way to a Learn Language Depends on Your Goals

If you want to learn to write high-quality articles without grammatical mistakes in French, you will not probably learn it only by speaking. The fastest way to learn to write French is simply: write in French. Also when you read books in French you can see the right forms and then you can use them yourself.

If you want to learn to speak a language (which is what the most people want) you can’t learn it by being silent. That’s the rough reality. You can for sure improve your speaking skills dramatically by listening hours and hours of podcasts. But you can’t reach the best level by being silent. You need to open your mouth and make mistakes.

I watched the interview of Luca Lampariello on Fluent in 3 Months Premium course. He was mistaken constantly for a native in various languages because he can speak them like a native.

He taught that if you want to reach C2-level you need to do even more than just everyday speaking. You need to increase the input of your target language. You need to listen to more native speakers, read more and practice more. Reaching fluency is the another thing that C2 level. Even native speakers make mistakes with their own language and different people have a different amount of words in their vocabulary.

The only situation when you fail to learn a language is when you quit practicing. Johan Tekfak said that according to studies you need to hear/see a foreign word 40 times until you have fully learned it.

Who have said that you should learn a foreign language in a certain way? A teacher at your school? Your friend? Me?

If some way doesn’t motivate you and you find languages hard then you know that this method is not for you. No problem. There are still 19231 other ways to learn a language. For example, I don’t like personally memorizing long lists of conjugation. Instead I prefer watching videos on Youtube or in FluentU because I believe it’s much more effective. In addition, it’s much more fun and relaxing.

If you find that some method works for you very well, then you should use it.

Sometimes people keep on looking for a perfect way to learn a language fast. They ask different people, make their research, search on the Internet and then eventually they don’t even start. The another guy who started to study the language at the same time when others are doing their “research” is already speaking a language with confidence.

You can always look for faster and better ways to learn but if you never start, you’ll never get there. What differs achievers from losers is that achievers take constant action. They start and keep on doing even though it’s not the perfect method. When I started to German I used a lot of Duolingo. I knew that probably it was not the fastest way to learn but it kept me motivated. I studied every day for about 100 days. I made huge progress. Was it the fastest way to learn German? I don’t know. But what I know for sure is that I enjoyed learning.

I am not saying that you shouldn’t care what about your learning method. It’s hugely important that you don’t waste your time and money on useless methods. My bottom line is that even though you don’t know what is the fastest way, keep on doing something. Gary Vaynerchuk says, 1 > 0. Don’t stay on zero. Make some little progress every day and it adds up to big results in the long run.

Want to Learn from the Best?

Many times people are very willing to tell their opinions about everything. They tell you what they think about God, money, politics, the Bible or even language learning. It doesn’t matter how much they know about a subject. But they claim to know the truth. I have heard for example ridiculous statements about the Bible from people who have never even read the book while I have read it several times. They claim to know it better. Then poor people give you advice what you should and shouldn’t do with money. They tell you how you could become rich while they are living from paycheck to paycheck (or unemployed with other people’s money).

My advice is that always listen to those who have achieved some results. That’s why I prefer to language learning techniques from those who have learned many languages themselves instead of school teachers. Benny Lewis speaks more than 10 languages himself and all are “self-taught”.

I recommend taking a look at his course Fluent in 3 Months if you want to learn languages faster. In the premium area, there are also interviews who speak 40 or even 50 languages. Those guys really know what they are talking about.

Now I want to hear from you. What have been the fastest ways for you? How did you learn a new language quickly?

8 thoughts on “What Is the Fastest Way to Learn a Foreign Language? – They Didn’t Teach This at School!”