Today I will show you What Are the Best Language Learning Games Online. We are living in 2017 and language learning games are better than ever before in the human history. You have much better tools and possibilities to learn a new language in a record time than ever. That’s why I highly recommend taking full benefit of these resources.

Many of these games have helped me a lot when I have learned new languages and I am sure that they will help you as well. Fasten your seat belts, choose your favorite and start practicing. Let’s go!

Language games are not only fun but also very helpful!

How Do Language Learning Games Work?

Before going into real examples, I want to use a few words explaining why language learning games are so powerful. First of all, they usually very fun which keeps up your motivation. They track your progress which gives you additional motivation boosts and shows that you are really learning lots of new words. But how can anyone learn a new language by playing a game funny on the Internet?

Many language learning experts have used thousands of hours studying how we learn languages and as a result, they have created these games. With games, you will learn new words, sentences, pronunciation, reading and listening and so on. Some language games cover all of these subjects.

You will need to memorize words or sentences in order to move to next level. In the other words, the game “forces” you to learn because otherwise, you couldn’t move forward. You will also learn useful phrases on very practical subjects that you will need in your everyday life with a new language.

When I tried LingQ for the first time I was a bit surprised and very impressed how well it works. It was easy to see a difference between this paid service and a free Duolingo. They have probably more resources to improve LingQ because people pay a little membership fee unlike in Duolingo. You can also use LingQ for free but if you want to get the full potential of it, then you need to get a full version.

In LingQ you can also find language tutors, have 1-on-1 private and group lessons. They have a vivid community of language learners and over the years already more than 1,000,000 people have tried their language game. By they way, LingQ is created by a guy who speaks 16 languages himself. His name is Steve Kaufman and he has used his own game for mastering many new languages.

If I would need to choose the best language learning game, it would probably be LingQ.

Bliu Bliu is a wonderful idea by a Lithuanian man Claudio Santori. Their program uses a new technology to get articles and translations from the Internet.

They arrange also 30-day challenges for each language (Spanish, French, German, etc.) where a native speaker helps every attendee personally to reach their goals. Those challenges are also a great idea because it helps you to make lots of progress in a short period of time.

In Bliu Bliu you can also study some more rare languages Toki Pona, Kyrzyg, and Xhosa. I don’t know if you have heard of those languages before but I hadn’t before facing Bliu Bliu. This is a great example that you will for sure learn any language that you want to study in Bliu Bliu.

Babbel has been downloaded more than 10 million times for smartphones and is widely known language learning game all around the world. May you have seen two brothers speaking 10 different languages and advertising Babbel on the Internet?

Babbel is a made by German guys and it’s literally a great way to improve your language knowledge. You will learn pronunciation, vocabulary, listening and many other skills that help you to speak a foreign language.

In my opinion, Babbel is one of the greatest resources. I have even once considered applied to work for them because I recognized that their service and company looks so great. At least not yet I didn’t go but who knows about the future. 🙂 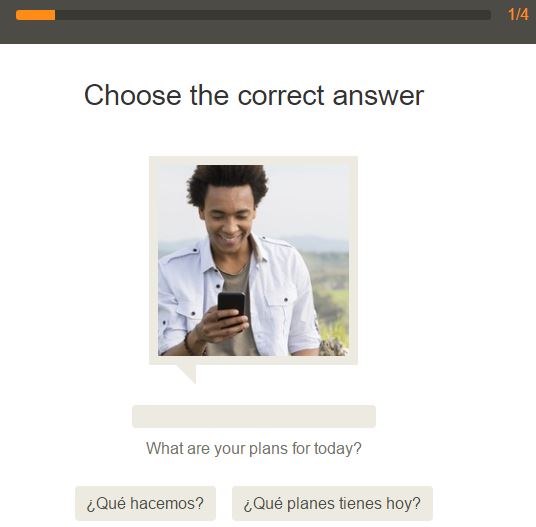 Duolingo is the most downloaded language game on Android store with more than 50 million downloads. And not without a good reason. Their service is 100% free and it’s getting better year by year. Many independent developers are working on new languages to make their service even bigger and better.

I started by French and German learning journeys with Duolingo and worked quite well. I improved my language skills pretty fast by playing the game. Many of my friends have also enjoyed using Duolingo. I remember how motivated one friend of mine was to play Duolingo when he did a student exchange in Spain.

For me, Memrise has always been another alternative for Duolingo because you can use Memrise for totally free. If you are not interested in investing any money for language learning, this is a great way to do it. But that’s not the only benefit of Memrise.

They have tens of thousands of language learning courses that has been created by their community members. It’s an interesting idea that their community develops Memrise all the time by adding new courses, improving current courses and so on. Also, you can become a part of that community. Of course, you don’t need to create own courses on Memrise if you don’t want but you can do it if you are interested.

Here I am using Memrise for learning German

Mango Languages is a very large site and they have also specialized language courses. Let me give a few examples. You can learn also rare languages like Tuvan (I’ve never heard of it before either!). Then you can study, for example, Medical Spanish, Feng Shui, and MSA Arabic.

Mango languages is a modern language learning game that you can play for free in many libraries. YES, you heard right. In libraries! Mango Languages is cooperating with local libraries so people can visit there and learn languages with this modern game. You can also have it on your own phone if you don’t want to visit the library but then you need to pay $20/month which is quite expensive compared to other language games in this article.

Rosetta Stone is one of the famous language learning games. You may have seen Michael Phelps recommending RS or big advertisements on the street if you are living in the U.S. Rosetta Stone is a big thing.

Their language learning game helps you to “learn a new language like a baby”. It means that they teach you with natural methods or at least that’s what they promise ;). When you study a new language with their courses, you don’t to translate words into your own native language. I really like this characteristic. You will learn to think in your target language because when you see, for example, a tree you know exactly what it means in your target language.

Rosetta Stone offers a language learning game, audio lessons, pronunciation and speaking exercises, 1-on-1 and group lessons and much more. Even though it seems like being all-in-one language learning service, I recommend using other methods as well. Rosetta Stone will help you a lot but I must mention that it’s more expensive than other games in this article.

Which One Is Your Favorite?

I love to hear experiences from our readers. Reading new comments makes my day so I want to ask you: Have you tried some of these language learning games? Did you like it? Why/why not?

I promise to respond to every single comment personally within 24 hours. Looking forward to hearing from you soon! 🙂

32 thoughts on “What Are the Best Language Learning Games Online? – Check Out 7 Incredible Games!”